After investigating the causal relationship between torque and angular acceleration, I introduced the possibility to the class that perhaps we also needed to revisit the Energy Transfer Model and the Momentum Transfer Model. The students agreed that an object that is rotating must have energy. This was pretty easy to demonstrate.

I set up a situation in the class where two of the variable inertia disks that we created on the 3D printers were placed at the top of an inclined ramp. The internal marbles were placed at two different configurations inside the disks and then the students predicted which disk would reach the end of the ramp first. I was pleased to find out that the class appeared to agree that the disk with the marbles located closer to the radius would be the winner. I really think that our investigation with the variable inertia disks solidified the students’ conceptual understanding of rotational inertia and the importance of mass distribution.

I have not yet found a good experiment where students could discover the rotational kinetic energy relationship, so I decided to take them through a derivation based on linear kinetic energy. I then asked the students to do some whiteboard work. I asked them to demonstrate that the disks would indeed reach the end of the ramp at different times. Although this wasn’t strictly a constructivist approach, it was good practice in doing some fairly difficult algebra without numerical values – something the students traditionally are not very good at.

We then moved onto momentum. Again, I started by reviewing the Momentum Transfer Model for a particle. At this point the pattern had been fairly well established. The relationship between angular and linear quantities seemed to have taken hold because the students were quick to propose a mathematical definition for angular momentum. Our next goal was to figure out whether this was a conserved quantity.

Mr Holt and I had created a set of metal disks that could be attached to the rotary sensors. I decided to create our own, rather than (sorry Vernier) buy them as I thought that the commercial kit was over priced. It wasn’t too hard to create the disks, especially when you have access to a CNC plasma cutter! 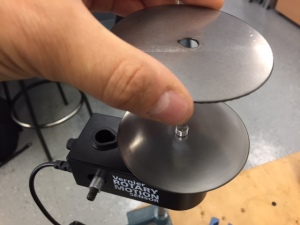 The students attached one disk to the rotary motion sensor and then got that disk spinning. They then took a second disk that had small magnets attached to it, and dropped this disk onto the spinning disk. The students compared the angular velocity before and after the disks were combined and then calculated the angular momentum of the system before and after. The data we got was quite good with the class getting in the range of only about a 5% to 6% difference.

Wrapping it Up (or Un-Rolling It Down)

As a final deployment, I decided to try the deployment activity that Frank Nochese did with his students. It seemed like a good (and fun) way to wrap up our model (or as I have already argued – models).

Before doing the deployment activity, I reviewed all the model specifics with the students. My point here was to impress on them that what we had not really built a new model, but rather had extended many of the prior particle models to include rigid extended bodies. This generally only required that we consider the moment arm in all the particle models. I think this really helped a number of students see the connection between models that they felt they understood and all this rotational stuff that seemed a bit confusing.

I then set them up with the deployment activity, but I asked them to specifically solve the problem using both energy and net torque. There was some success, but I realized that the task was a bit much for the class. Once again, it is clear that I need to give them more practice with these problems that require multiple steps and that involve algebraic manipulation of symbols without numbers. Plenty of time to practice that!